Residents express their concerns over parking on Allentown streets

Contentious at times, supportive at others and hopeful in the end, the quarterly meeting of the Allentown CDC (ACDC) had residents expressing their opinions concerning changes in the neighborhood.

First on the agenda was discussion about the possibility of having metered parking returned to Warrington Avenue. ACDC President Tom Smith noted previously officials from the Pittsburgh Parking Authority and city’s Public Works met with business owners to discuss the return to paid parking in the business district.

When Warrington Avenue was under construction, beginning about four years ago, the meters were removed from the street. According to the city officials, Allentown has the only business district in the city without metered parking.

At the business meeting, it was pointed out the purpose of metered parking wasn’t to generate revenue, but to discourage all-day parkers and increase turnover of spaces to allow short term customers access. Individual meters wouldn’t be returning, instead parking kiosks would be used where parkers would have to enter their license plate number and payment. Four kiosks are expected to be placed in Allentown, not counting the two already in use at the Parking Authority lots.

One business owner challenged that thinking instead calling it a tax on those who can least afford it, an opinion echoed by several residents.

If metered parking does return to the business district, it will initially return in the same areas as previous: the 700 and 800 blocks of Warrington Avenue and Allen Street from Warrington to Manton Way.

“Metered parking will affect the neighborhood, if you throw a pebble in a pond, it spreads out,” Mr. Smith said. “If there are all-day parkers on Warrington Avenue, they’re going to go someplace else.”

He noted six months ago, Work Hard Pittsburgh in Allentown completed a survey of parking along Warrington Avenue and several block in either direction. Utilizing the survey as a starting point, Neil Manganaro, chief of staff to Councilman Bruce Kraus, walked the neighborhood to see what the parking situation was.

“A lot of it is coming in response to some requests from the business owners. A lot of is coming from a desire to return to the historical situation on East Warrington as the business district picks up,” Mr. Manganaro said of the reasons for returning metered parking.

He said “quite a bit of capacity” was identified on the residential streets to absorb the 50 to 70 cars now parking on Warrington Avenue in a typical day.

“A lot of the cars parked on Warrington Avenue are utilizing the businesses, it’s not as if every car parked on East Warrington through the day is an all-day parker. We wouldn’t really anticipate that whole number, all of a sudden at the drop of a hat, come back in and put parking pressure back on the folks in the houses and the streets right next to the business district,” he continued.

Mr. Manganaro asked for input from the residents to make things easier “if and when” metered parking returns. One thing that would be done prior to metered parking would be increased signage in the neighborhood to detail where parking is and is not permitted.

Residents complained people are currently parking in the lots and because of lax enforcement, failing to put money in the kiosks. Mr. Manganaro relied if metered parking does come to Warrington Avenue, greater enforcement can be expected on the street and in the lots. In addition, the Parking Authority is also permitted to enforce all parking regulations including parking in front of a driveway or too close to a corner or fire hydrant.

An Allen Street resident was concerned because area businesses are taking up the spaces on her street, Allen Street. She asked Mr. Manganaro why the city doesn’t enforce a parking requirement for businesses.

He replied the city requires parking in new developments but doesn’t always when they are in an existing business district. He said he would look into her complaint.

A Carnival Way resident was concerned moving the all-day parkers off Warrington Avenue would put more cars on his street preventing him from parking in front of his home.

Mr. Manganaro said they are “hopeful” that not that many cars will concentrate in one area to become a burden.

“If you want to add more parking, put Allen Street back to one-way. You’ve got eight spots there,” the resident replied.

A group of resident argued against the changing of Allen to one-way saying they never wanted two-way traffic and wanted parking returned to both sides of the street.

Several people said it wouldn’t make a difference, it would only generate income for the city when parkers pay at the kiosks. Mr. Manganaro said it’s expected there would be a two-hour limit and the hours of enforcement would be from 8 a.m. to 6 p.m.

Those residents were also concerned the parking changes and the making of Allen one-way were done to benefit one business. They said since becoming one-way it has become a safety hazard for school children in the neighborhood.

Mr. Manganaro said he would pass their concerns on to the city’s traffic engineer.

Another resident asked if the city would be able to institute a two-hour limit for non-residents on Manton, Carnival and other affected streets. Mr. Manganaro replied the city does have a Residential Permit Parking Program which could make that possible.

When asked for a timetable when metered parking could return, he said the earliest could be in February or March of next year, but in all likelihood it would be in the spring.

Residents asked for a future meeting where they could be updated on metered parking. In addition, there would be information about how to explore getting residential permit parking in the neighborhood if necessary.

The rest of the agenda included a brief presentation from Jolie and Bobby Valentine who have started a project to put a parklet in the vacant lot next to Paisano’s Pizza on Warrington Avenue.

Jolie Valentine explained the project is part of the Industry on Industry public art project through the Hilltop Alliance. To create the parklet, they are currently raising money through GoFundMe, https://www.gofundme.com/allentownparklet, and have around $2,000 pledged so far and an additional amount pledged from the Hilltop Alliance.

Their plan is to level and fix the sidewalk, level and plant grass seed in the lot itself and shield the trash containers that are there. In addition, fencing with a pergola making a “nice entry way” will be added. Plantings will be added at a later date.

“Way down the road,” Ms. Valentine said they would like to work with the lot’s owner on making the property more of a gathering space with picnic tables or benches. A day when neighborhood residents could come in and help make stepping stones for the parklet is also hoped for in the future.

Ms. Valentine said there would be a community meeting sometime in the future to get input from the neighborhood.

Siena Kane, Warrington Avenue business district manager for the Hilltop Alliance, briefly updated those in attendance on some of the new businesses coming to the neighborhood.

Day La Soul, a catering company, is going to open a storefront in late October or early November in the former Heyl Florist building at 829 E. Warrington Avenue to sell some fruits and vegetables, sandwiches, juices, rice, beans and more depending on what’s available and what sells. They will also have fresh eggs, milk and bread.

Eventually Day La Soul will open a restaurant in the adjoining storefront.

She noted Sweet Peaches has outgrown the restaurant in Allentown and is moving to a new location with a new name in the Strip District. The space won’t be vacant long, a vegan restaurant, Onion Maiden, will be moving in soon.

Onion Maiden will be open Tuesday through Sunday for dinner hours in addition to operating a food truck and doing pop-up events. 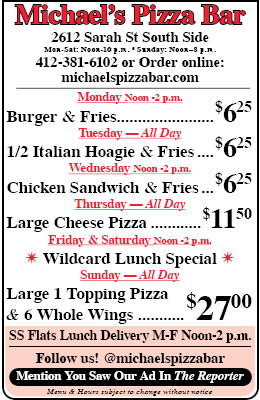