Theft from Vehicle – 100 blk. Augusta St. – between 4/28 at 10:00 PM and 4/30 at 9:30 AM – The victim states she and her husband had left their vehicles unlocked. Her car had been rummaged through and nothing was discovered missing. However, her husband’s wallet was missing from his truck. Inside the wallet was $20, driver’s license, and various credit cards.

Robbery – Southern Ave. at Sandwich St. – between 4/26 at 9:30 PM and 4/27 at 7:16 PM – Victim states she was waiting for a bus at the location and set her purse down to retrieve her bus fare. At this time, the suspect grabbed her purse out of her hand and fled. Inside the purse were an ID card, prescriptions, $40, and a cell phone. Total value $685.

Theft from Business/Trespass – 30 blk. S. 27th St. – 4/23 at 6:05 PM – reported 4/26 – Reporting person who is an employee of the business states the suspect who is not permitted in the business, had been observed on the premise, then leave carrying something. After reviewing video footage, it was observed this suspect took a donation jar from the counter. This male fled on a green Huffy bicycle. Total value $80.

Theft from Vehicle – S. 24th & Sidney Sts. – between 4/20 at 8:30 PM and 4/27 at 9:00 AM – Victim states her wallet was taken from her parked car. She received a phone call from a business that her wallet was in a trash can outside of their business. Victim did retrieve her wallet and only wanted a report for documentation.

Theft from Vehicle – 2100 blk. Sidney St. – between 4/26 at 9:00 PM and 4/27 at 12:00 PM – Victim reports she discovered her car had been broken into. No forced entry was observed. Her glove box had been left open and things were moved around in the car. Missing were coins.

Robbery – S. 19th at Sidney Sts. – 4/28 at 11:30 PM – Three victims state they were walking near 18th St. when two unknown BM suspects approached them. The heavier suspect pointed a gun at them and demanded their property. Taken were a “Bathing Ape” red sweatshirt, a red belt, a white belt, a wallet containing ID and $10, and car keys. Total value $1210. The suspects are described as BM’s between 20- 30 years old, one being 6’1” and 210’ and the other as light complected with curly hair. 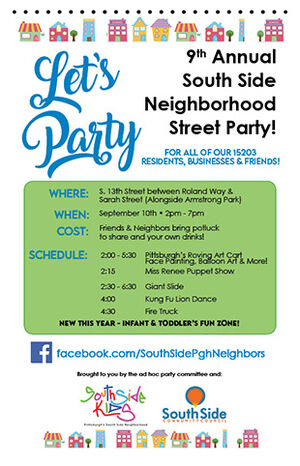 Theft/Identity Theft/Access Device Fraud – 200 blk. S. 9th St. – between 3/1 and 4/27 – Victim states was required by the Welfare Dept. to file a police report. He states he called them due to not receiving his food stamp allotment on his card. He discovered $146 had been spent in unauthorized transactions.

Burglary (attempt) – 2100 blk. Sidney St. – 5/1 at 11:15 PM – Victim states he heard banging on his front door and looked out to see a male trying to get into his residence. He called for police. The victim noticed his front window had been opened a few inches and a hand print was found on the glass.

Stolen Auto – 100 blk. Schubert St. – between 4/28 at 5:00 PM and 4/29 at 7:15 AM – Victim states her car was taken from in front of her residence. NC plate WZJ7410, gray 2006 Mazda. On 5/1, an officer was flagged down by the victim stating her vehicle was in the area. The officer located the vehicle with a BM juvenile/suspect sitting in the driver’s seat. He was transported to Shuman Center.

Burglary – 2500 blk. Arlington Ave. – 4/28 between 8:00 AM and 7:30 PM – When the victim returned home, she discovered the rear door had been forced open. There were pry marks observed on the door and the deadbolt was broken. Items stolen were a diamond ring, gold ring, 2 laptop computers, and a television. Total value $2550.

Burglary – 20 blk. Eleanor St. – 4/28 at 1:00 PM – Victim states she was in her bedroom when the WM suspect stuck his head in the doorway. After seeing each other, they both fled. The victim ran outside and called for police but didn’t know where the suspect ran to. After police checked the residence, the victim called for her roommate to come home. After her arrival, it was confirmed her room on the third floor was in a state of disarray with a 32” television missing. Value $300.

Robbery (attempt) – 900 blk. Manton Way – 4/27 at 11:20 PM – Victim states he was making a food delivery at this location when he was approached by the first suspect asking for the pizza. The victim told the suspect he needed the money first. That was when two more suspects approached him, one wearing a white hoodie/jacket, pointed a gun at him and demanded the pizza. The victim turned around and drove back to the business to report the incident. Nothing was taken from the victim. The suspects all were BM’s, one wearing a white hoodie. Three BM suspects.

Robbery (attempt) – 900 blk. Manton Way – 5/1 at 9:30 PM – Victim went to Zone 3 station to report he suspected the food delivery he was supposed to make at this location was going to be a robbery. The delivery address appeared to be abandoned, when checked by officers.

Robbery – 900 blk. Manton Way – 5/1 at 10:10 PM – Victim flagged down an officer stating he was just robbed by three BM suspects. The victim stated he went to the address where he was ordered to hand over the food by the person who answered the door. At that time, another male was standing behind him with a gun to his head. Officers responded to the area. Three juveniles were ID’d and released.

The three robberies above are being investigated by Zone 3 plainclothes detectives.

Theft from Vehicle – Arlington and Knox Aves. – 4/25 at 11:45 PM – Victim states he was unloading the vehicle while the car was running. When he came back outside, the keys were taken from the car. The car is a rental.

Theft from Vehicle – Hazeldell St. and Brownsville Rd. – 4/27 between 7:40 PM and 10:00 PM – Victim states she was positive she had locked her car. She discovered suspect made entry and took a Garmin GPS, a phone charger, a silver bracelet, and cigars. No damage from forced entry was found. Total value $64.20.

4-27 5:00 AM – Victim discovered someone made entry into his car. Missing were a garage opener and a house key (not victim’s house key). No forced entry was observed.

Burglary – 2200 blk. Brownsville Rd. – 4/30 at 5:18 PM – Victim states he left his residence for approximately 15 minutes. When he returned, he saw his front door open and broken. He went upstairs to find the suspect, who is known to the victim, inside. The suspect was taken into custody by officers. Arrested was James Chardello, Jr. of Lucina Ave.

Stolen Auto – 1 blk. Wynoka St. – between 4/29 at 10:00 PM and 4/30 at 1:21 PM – Victim states she lent her car to her mother. Her mother met a male online and met up with him. Her mother went to her residence and left the male in the car while it was still running. When her mother came back to the car, it was gone. Although her mother did speak with the suspect, he told her he would return the car. The car remains missing. No plate number available due to a conflict with the VIN number. The car is a black, Saturn Ion, sedan.

Burglary (business) – 1200 blk. Grandview Ave. – 4/26 between 10:20 PM and 10:40 PM – After reviewing video surveillance of the inside of the restaurant, it was discovered that someone had entered the business by “popping open the alley door”, proceeded down to the main register and took approximately $300. The suspect was wearing a mask. However, the gait of the suspect matches a recently fired employee.

Theft – Mountain Ave at Fisher St. – 4/25 at 1:00 PM – Reporting person states she found 2 City of Pittsburgh official “No Trespassing” signs had been removed from where they had been erected and thrown in her bushes. City of Pittsburgh is the victim.

Theft from Person – 500 blk. Brownsville Rd. – between 4/18 at 9:00 AM and 4/19 at 6:00 PM – Victim states she recently had a fire at her residence and was given a credit card by the Red Cross to use for housing. She had fallen asleep and found the card was gone. She believes it was taken by a known actor. The value of the card was for $530, which the Red Cross confirmed had been used.