There were just enough council members at the Mt. Oliver Borough Council meeting of Feb. 16 for a meeting to occur on the snowy, freezing evening. Absent were: Billie Michener, Nick Viglione, and Barbara Keener.

The meeting began with a presentation by John McGoran, manager of municipal services for Republic Services, the borough’s garbage hauler. He said he and council President Darnell Sains have had frequent phone conversations over the past six weeks over various problems, including missed streets for pick-up.

He said he believes the issues since January are due primarily to the snowy weather, and the borough’s hills.

“We can’t afford to get in an accident,” he said of these litigious times.

To a question from Councilwoman Amber McGough if broken down trucks are an issue, Mr. McGoran said 19 new trucks have been added to the fleet since they began the borough contract.

Mr. McGoran said while new drivers are being sought, there is a sufficient number for now. Any potential drivers must pass a drug test. A commercial driver’s license (CDL) is also a requirement.

Republic Services has 28,000 employees nationwide, from which drivers can be pulled if the need arises, he said.

Drivers want to finish in Mt. Oliver by 2 p.m., and be at the landfill in Imperial by 3 p.m.

Mr. Sains told Mr. McGoran that Republic Services “dropped the ball” several times on certain streets. He said longtime residents are experiencing problems they never have since the company took over.

He said if Republic Services does not pick up trash, it stays put outdoors. In the summer, it becomes a health hazard. In the winter, animals will eat trash left out.

“I hope we have this issue resolved. When it comes to these people, I’m fighting all the way,” Mr. Sains said.

Councilman Dave Lowe said for problems with garbage billing, borough residents should call the Keystone Collections Group, which does the billing and handling of delinquent accounts. The phone number is: 866-539-1100, and ask for Robin Finley.

For problems with garbage pickup, they should call Republic Services at 412-429-2600.

Police Chief Matthew Juzwick added he would have yellow lines painted, and erect “no parking” signs where appropriate.

In the code enforcement report for the past month, Councilman Frank Bernardini reported there were 24 rental inspections; 50 units; 16 violations and notices; 48 citations; six complaints; two building permits; and 15 legal citations.

Mr. Bernardini said residents and businesses have 24 hours to clear snow from the sidewalks in front of their home or risk being cited. The problem lies with vacant properties, such as, who do they cite?

Mr. Sains asked Mr. Bernardini to ask building inspector Chuck Knaus how many citations are issued, and how many are paid.

In the parks and recreation report, Mr. Bernardini said there will be an effort in mid-March to get youngsters interested in dec hockey and soccer. The hope is both sports will be in action by the summer.

Next, Chief Juzwick reported there were only 464 calls last month, which is reflective of a lower call volume in the winter. There were also 39 domestic calls and 35 drug arrests.

In 2014, the police department’s drug task force seized $29,408 in cash from drug-related crimes.

“The system is phenomenal,” he said.

In the health/maintenance report, Mr. Lowe reported water shutoffs will be taking place in the future for delinquent sewage accounts of $400 and above. Delinquents must reconcile their accounts, or sign on for a payment plan to avoid shutoffs.

He said the borough has enough salt for the roads, having used about 110 tons so far. There are 70 tons in reserve.

An attendee asked if the borough planned any sports besides hockey and soccer.

Mr. Sains said pick-up hockey and soccer are played year-round, weather permitting, at no cost. Occasionally, there is a basketball tournament.

“It’s hard to get participants for anything here,” Mr. Bernardini said. He said only five youths signed up in a three-day sign-up period this year.

The attendee said Brentwood has a dec hockey league. There are also a lot of resources available in grant money, he said.

In his update, project manager Ricky Hopkinson said the Student Conservation Association (SCA) wants to revamp the parklet at no cost to the borough.

The SCA is a national and environmental nonprofit organization with a mission of inspiring stewardship of communities by engaging young people in hands-on service.

The SCA will also apply for a grant for six blue recycling containers for the 100-500 blocks of Brownsville Rd.

Mr. Hopkinson also reported the planning committee will soon begin the comprehensive plan process. A committee of 1-3 council members and other volunteers is needed.

A comprehensive plan is done every 10 years. The borough last did one in 2004.

His last item was that a Pittsburgh Public Schools representative said a student is interested in local government. Council agreed to permit the student to visit the municipal center and see how various departments operate.

In the question-and-answer session, a resident said he is interested in buying an abandoned house on Margaret St.

Mr. Hopkinson said he would help him acquire the information he needs.

The resident also said he was issued a citation for not clearing snow from his sidewalk within 24 hours. He said he works 24-hour shifts, and so he may not even be home for a snowstorm.

Mr. Sains said if not home or out of town, he must make provisions for someone to clear the snow.

Another attendee asked about who clears the sidewalks of absentee owner properties. He suggested having the borough pay youngsters to do so, and then lien the property.

Mr. Sains said that will be an issue for a future borough manager to tackle.

The next council meeting will be on March 16. 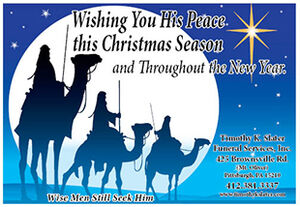